Calling all confounded cube connoisseurs! We have some exciting news regarding Shovel Knight Pocket Dungeon’s DLC…

In our most recent Yacht Club Games Presents, we revealed that we were working on an expansive slate of DLC (3 packs) for our beloved roguelike-puzzler, Shovel Knight Pocket Dungeon! With that in mind, developing a well-balanced game can be quite difficult  - especially if it’s a unique hybrid genre! So, in true Yacht Club Games fashion, we thought it would be fun to pull back the development curtain and invite you to help us make Pocket Dungeon’s DLC truly shine!

Today, we’re excited to announce that we’re releasing an Early Preview of the first Puzzler Pack on Steam! The entire DLC Pack is FREE, so you’ll only need the base game to delve into the Pocket Dungeon’s new content.

Please keep in mind that since the DLC pack is still in development, we'll be continuously adding new content and fixing bugs! Players are encouraged to share their opinions and suggestions on our Discord channel!

Everyone’s favorite puzzle prodigy is now a playable character! While on your run, you’ll be able to rotate surrounding foes clockwise to create convenient new combos!

How to Unlock Puzzle Knight: Defeat Puzzle Knight and beat the game! This can be done with any character. If you have already done this, Puzzle Knight will unlock automatically in the campsite!

Our green mini-game queen can now embark on her very own Pocket Dungeon adventure! Utilize her awesome alchemist abilities by exploding nearby potions. Chain them to get more bang for your buck!

How to Unlock Mona: Beat the game and earn the “true ending” as Plague Knight!  If you have already done this, Mona will unlock automatically in the campsite!

An earthy plot of land has appeared in the Pocket Dungeon! Ready that green thumb of yours, the wholesome Hedge Farmer needs some agricultural assistance!

How to Unlock the Hedge Farm: Beat the game and get the “true ending”! This can be done with any character. If you have already done this, the area will unlock automatically. 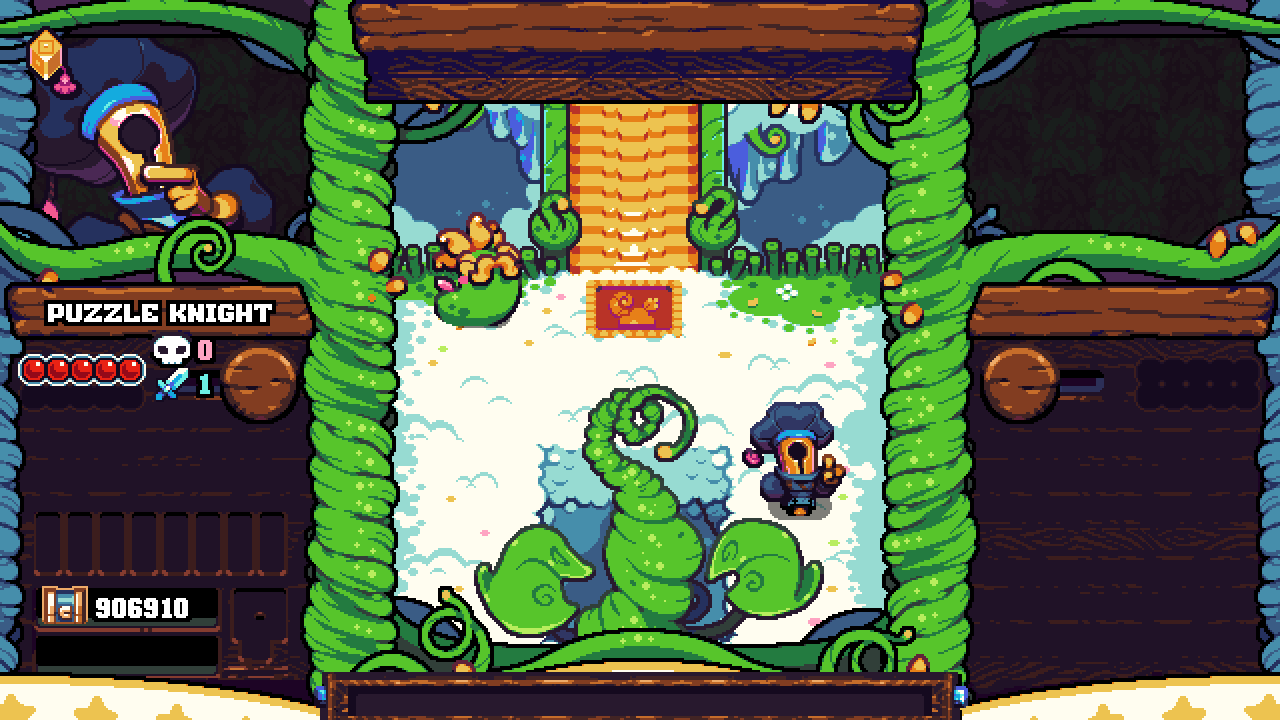 Uncover a brand new secret quest in the Pocket Dungeon! Scale a colossal beanstalk to discover a confounding castle nestled in the clouds!
How to Unlock Castle Quandary: It’s a secret to everybody....except maybe the Hedge Farmer. If you help him, he might reveal some sweet secrets!

Note: Advanced Mode and Wacky Challenge are not yet available.

Refract and Character Challenges are playable with:

Note: The in-game text provided is not final and is subject to change!

Chester dug up more nifty Relics to aid you on your Pocket Dungeon adventure!

Chester's Map: Increases chests found in stages from 3 to 4!

*NEW CONTENT* Super Skeleton Key: This is the only key you will ever need! Rumors say, other keys burst when hit with it!  Terrific!

*NEW CONTENT* Stick of Ram: Charging in the same direction will give you more damage! Make sure to not slow down!

Note: The names are still tentative! They might be different in-game!

Whoa! A well-tailored traveler has wandered into the Pocket Dungeon. He’ll sell you various headpieces that modify your runs! There will be 20+ run modifiers to purchase!

Challenge yourself with new takes on your favorite character’s abilities! Variety is the spice of life!

Mod support will allow players to add their own content to the game. This feature will only be for the PC version of the DLC come release.

When will the Puzzlers Pack 1 DLC pack be available for consoles?

Do I need to own Shovel Knight Pocket Dungeon to play the Early Preview DLC?

How do I give feedback on the DLC?

For any other questions, please reach out at [email protected]!

We wish everyone the best of times playing Pocket Dungeon. There are two more DLC packs on the horizon! Stay tuned for more info!